Have you ever felt small in comparison to the growing problems we face as a society?

As one person trying to make a difference on this planet there is not a lot that can be accomplished; you must change the minds of your peers. In order to change the minds of others you must start with yourself. This is exactly what John Francis does throughout his life as told through his autobiography Planet Walker. 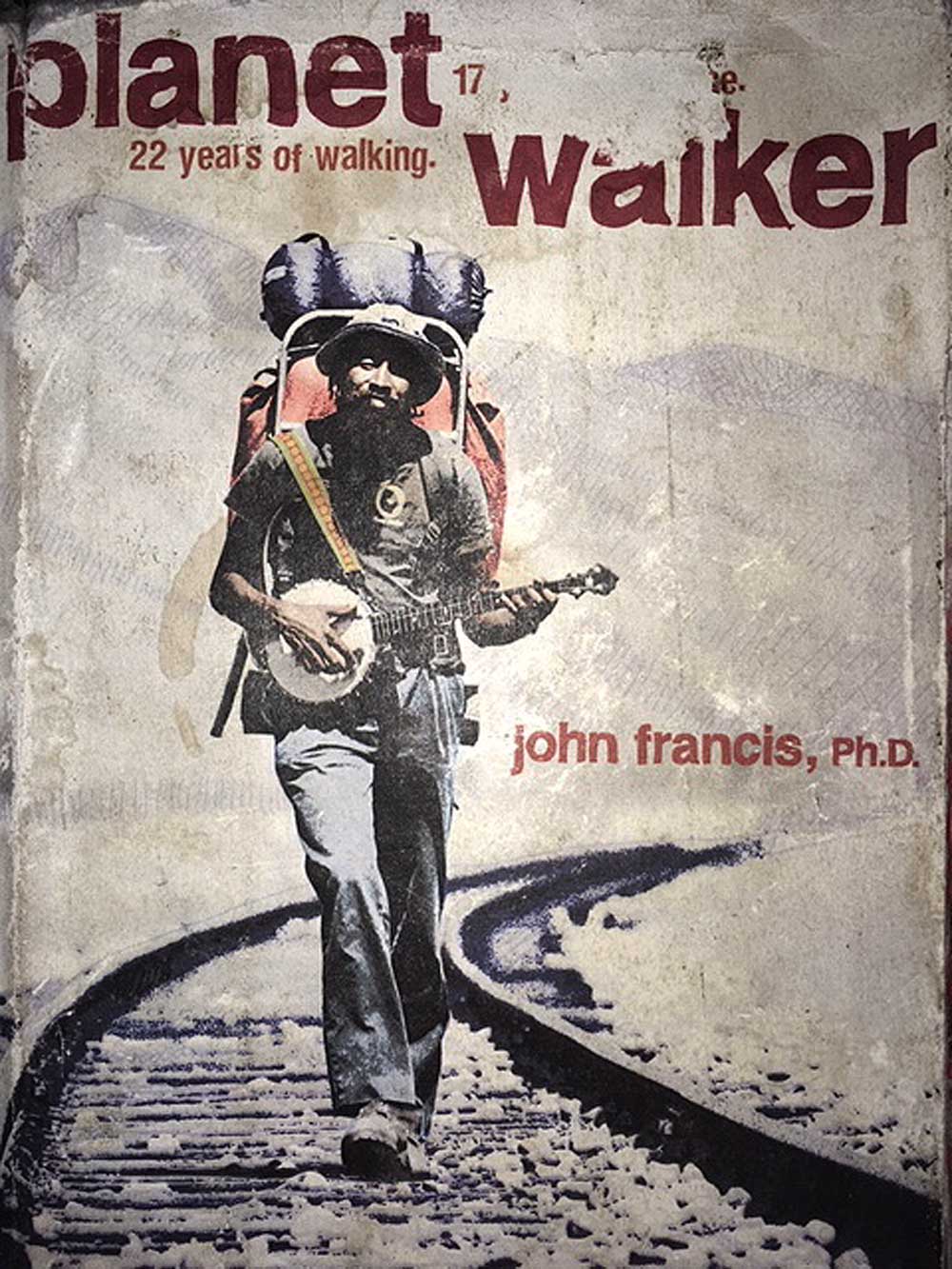 In this book, John Francis tells the story of his life, starting in 1971 when he witnessed an oil spill in the San Francisco bay  (a personal account of the spill from a volunteer can be found here: http://www.outsidelands.org/1971_oil_spill.php), a moment that would change his life forever. In coping with this experience, Francis soon gave up the use of motorized vehicles as a protest and to not feel the guilt associated with fossil fuel consumption. He continued this for 22 years. Along with not using motorized transportation, Francis also gave up speaking for 17 years. This book covers topics such as Environmental issues, the power of developing positive habits along with being consistent in these habits and being persistent in the pursuit of meaningful goals, and also remaining present with the people you are with and the places where you are.

“The environmental crisis is an outward manifestation of a crisis of mind and spirit. There could be no greater misconception of its meaning than to believe it to be concerned only with endangered wildlife, human-made ugliness and pollution. These are parts of it, but, more importantly, the crisis is concerned with the kind of creatures we are and what we must become in order to survive.” -Lynton K. Caldwell 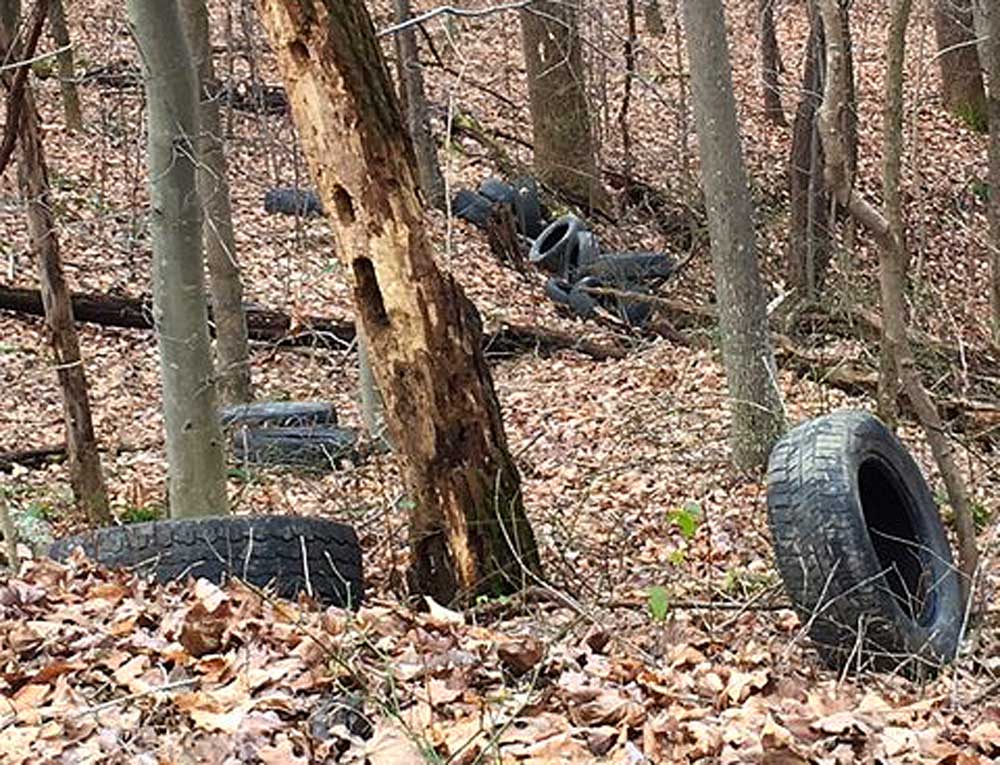 Much like the oil spill John Francis witnessed in 1971, we too experience our fair share of evidence today that human impact is having a damaging effect on this planet we call home. Examples of this are rising average temperatures, larger and more regular forest fires, more flooding as sea levels rise, shrinking of glaciers and polar ice caps, and a continuous rise in ocean acidity, just to name a few. Not only do these put human kind at risk but many plant and animal species are becoming endangered and extinct as a result of our actions. This crisis, as the aforementioned quote states, is concerned with the kind of creatures we are and what we must become in order to survive. John Francis recognized that in order for a difference to be made he had to change what kind of creature he was.

We, at High Trails, have the opportunity to share ideas with growing and learning minds that can possibly benefit the outcome of our planet’s health. In the Environmental Awareness class, we teach students problems we face and ways we can better care for our home, such as reducing, reusing, repairing, and recycling non-renewable resources, and discovering alternatives to fossil fuels. 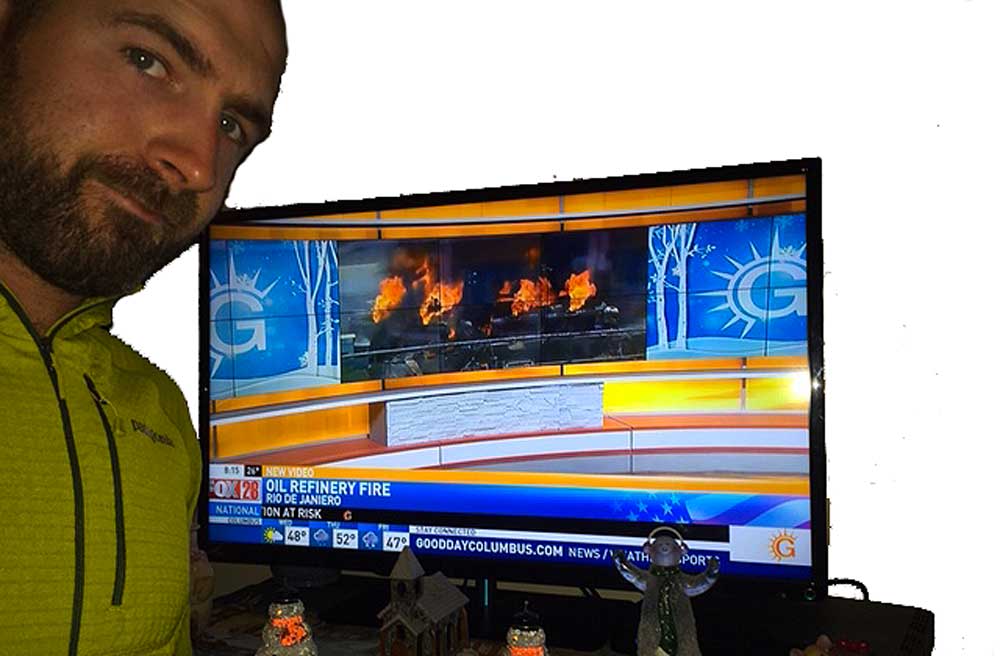 Our habits are our rituals as human beings and our rituals are a reflection of who we are and what we want to become. Francis develops many new habits over the duration of Planet Walker. He begins to walk as his main source of transportation allowing him daily exercise and excluding him as a contributor in fossil fuel consumption. He begins a vow of silence. This vow allowed him to hear the stories of others and be present with his surroundings, whether in nature or with people, or with people in nature. It also provided him with a challenge in communication, using sign language and miming as his main forms of communication. He began to make one painting or drawing daily as a practice in connecting more deeply to the place where he was, like being able to focus on smaller details. Additionally, he often played and practiced banjo, as music is something that can be universally shared and understood.

What are your habits or rituals? How do they reflect who you are or what you would like to become? At High Trails the students get first hand exposure to our habits and rituals, some of which are: being mindful of garbage and waste left around our forests, being mindful of food waste, and walking around our forest to gain deeper understanding of the parts that make up the whole. Students also do things that challenge themselves and try new things that can be out of their comfort zone, like rock climbing, petting snakes, archery, walking outdoors at night, and even line dancing.

“My lifetime goal is to sail and walk around the planet as a part of my education with the spirit of hope that in some way I might help others and benefit the planet” -John Francis Ph.D. 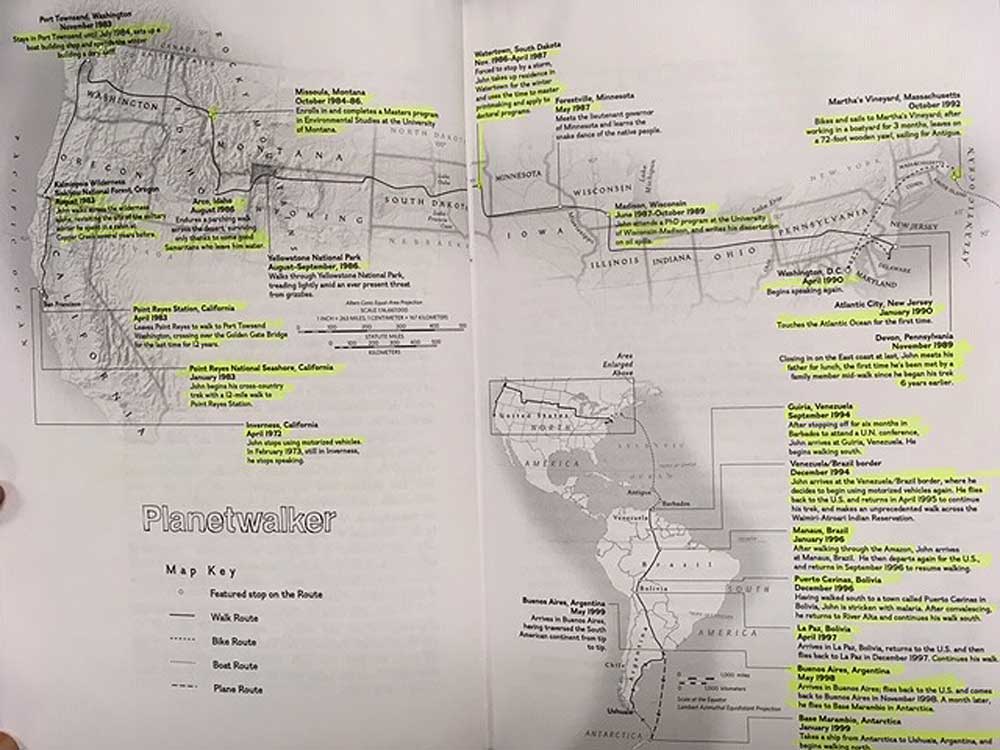 In the pursuit of a meaningful goal, sacrifices must be made. In John Francis’ case he sacrificed the use of motorized vehicles and partook in a vow of silence. There was chaos around him as he received scrutiny from strangers and even from his own family, who believed he was crazy. In the pursuit of meaning, the chaos around can be justified by the vision of the end result. For Francis, the end result was helping others and benefiting the planet.

In our lives as instructors, walking through the forest with up to 16 students can at times be chaotic. Instructors sacrifice solitude in the pursuit of a similar goal to John Francis’. We want to teach these young humans how the forest around them is functioning with all of these small or large moving parts and why it is important to care for our environment. We want to help others and benefit the world and hope that someday, they too will share this meaningful goal. 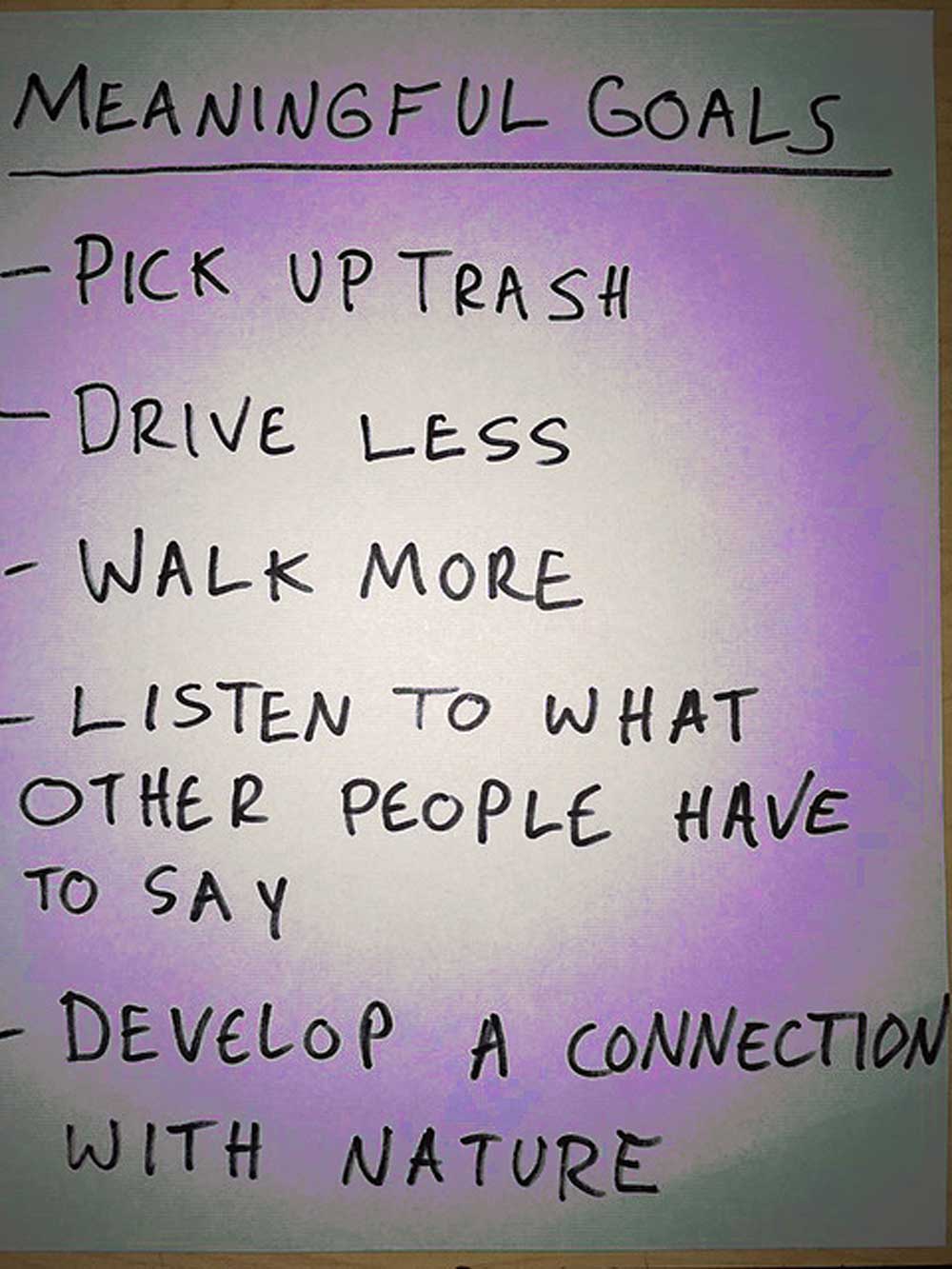 Perhaps the most fascinating fact about John Francis is that during his 22 years of walking and 17 years of silence, he earned a masters degree in Environmental Studies from the University of Montana and then earned a doctorate degree from the University of Wisconsin-Madison. Twenty years after witnessing the oil spill in the San Francisco Bay, he was recruited by the federal government to write U.S. oil spill regulations.

Planet Walker inspired me to take my own walk while attempting my own vow of silence. My walk was a 4 day 50 mile backpacking trip along the Buckeye Trail in Ohio. 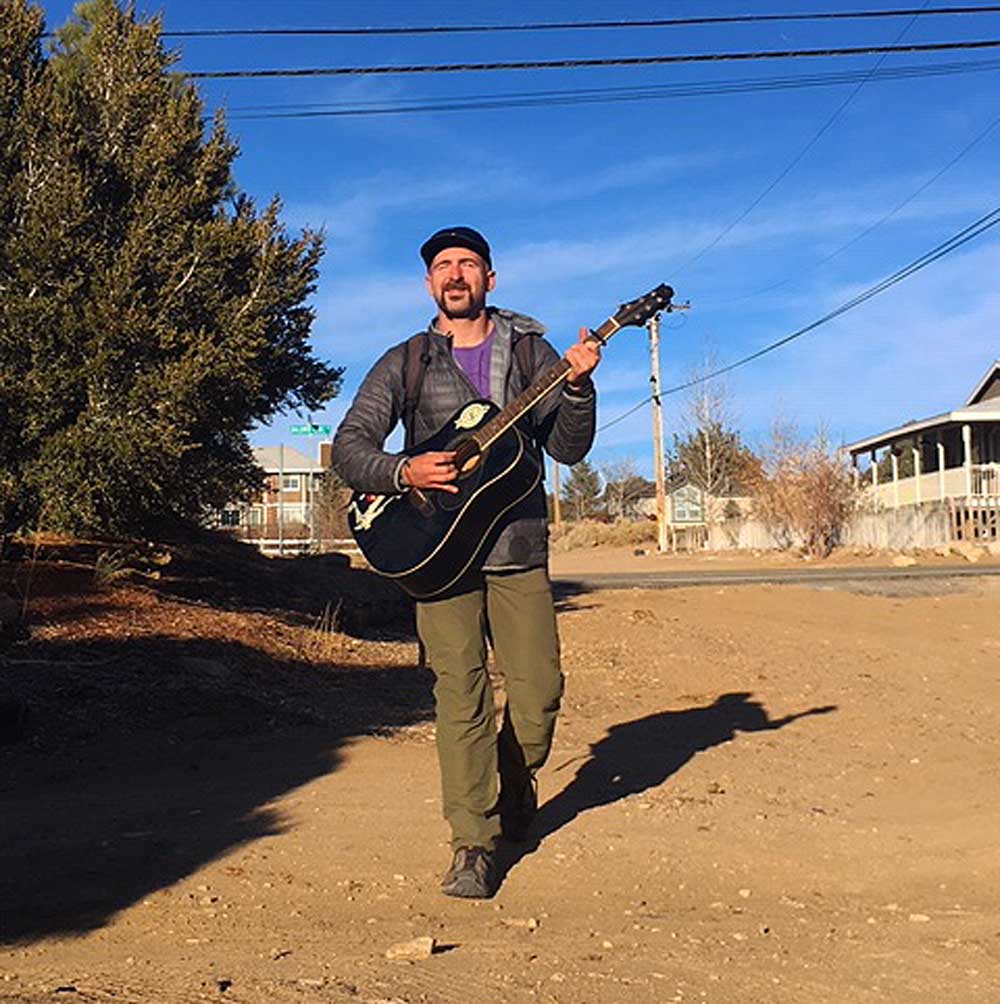 I discovered that it is much more difficult to remain silent than I had originally assumed. I only remained completely silent on one of the four days of the trip. I slipped up and let noise escape me by cursing my shoes for allowing water to get inside, by singing, by initiating conversation with strangers, or by talking to myself. This vow of silence allowed me to realize how much I tend to vocalize my thoughts without even thinking! It is important to listen. While listening we are seeking to understand something that we have yet to discover and when speaking, we often are only repeating something we already know.

“We can change the world, through our own impossible journey, each one of us has the capacity to change and make a difference in our world.” -John Francis Ph.D. 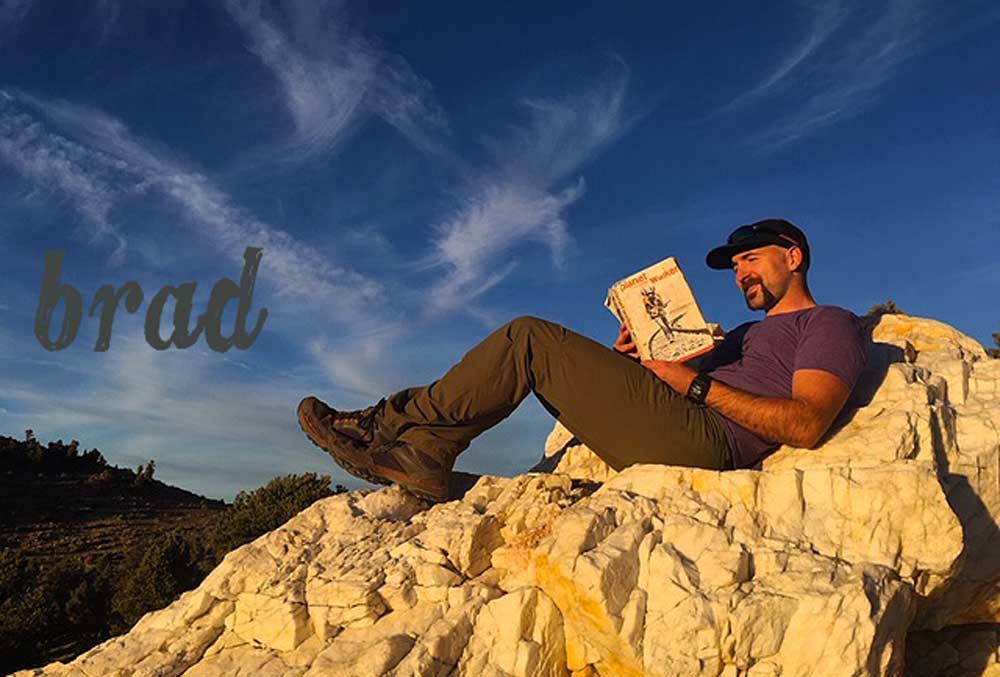