“Who knows one characteristic of a mammal?” says every High Trails instructor, once a week.

“Warm-blooded!” answers an eager student, remembering to raise their hand only after already blurting out the words. Now, how do we access this student’s prior knowledge and increase it with the fancy science word “endothermic?” Are fancy science words important, or is it just important to understand the concepts? 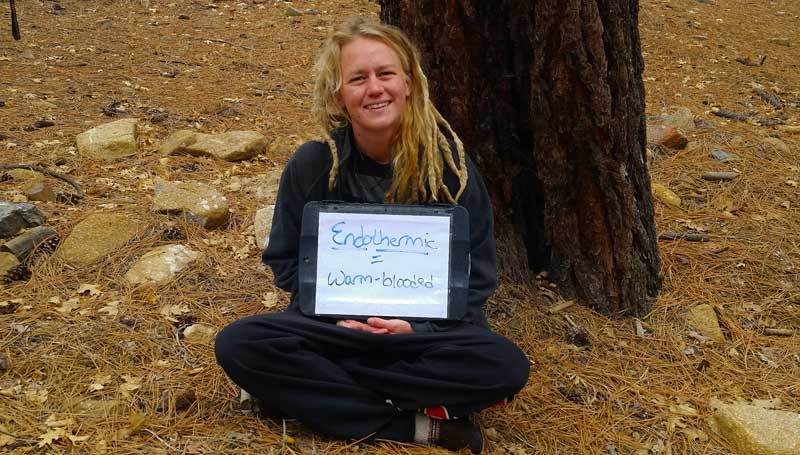 I love to teach fancy science words, for several reasons. One, it makes students feel like they are genius scientists exploring the big, unknown, cool forest around them. Two, it will help them out in school later on. But mostly, I like to give them the tools to figure out what other big fancy science words are in the future, because they are generally pretty smart people who don’t need to be intimidated by something as simple as long words. The cool thing about words is that when you start to learn roots, it helps you out with vocabulary in the future.

The High Trails progression of Latin

Does anyone know what thermic means?”

Usually, someone does. “Doesn’t that mean hot?”

“Yep, that’s right! Thermia means heat, and endo means inside, so endothermic means that we get our heat from inside our bodies instead of from our outside environment.”

They may or may not forget this part of the lesson immediately, but science’s obsession with Latin will not let them forget for long. Next class is Water Wonders, and one of the four types of pollution is called thermal pollution. “Can anyone guess what thermal pollution might be?” Dead silence. “Who remembers endothermic from our last class?” 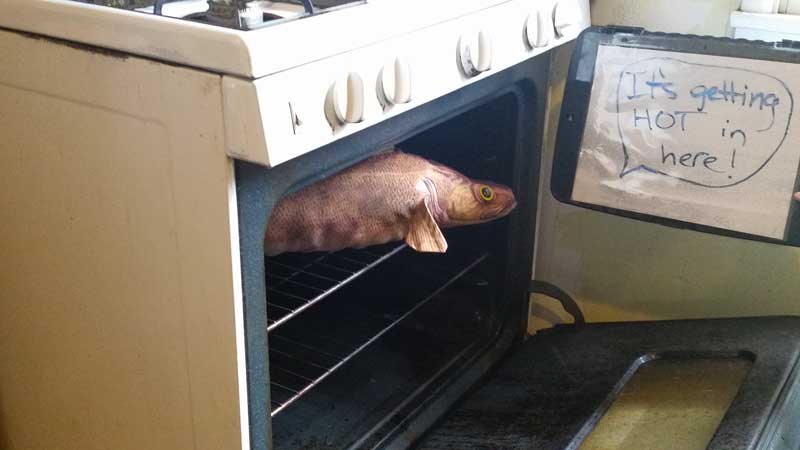 After Water Wonders is Environmental Awareness, and pretty soon I’m pulling out an alternative energy card that says Geothermal Energy on it. I underline thermal on my whiteboard, and hands go up before I even ask what it means. Then, I underline geo. 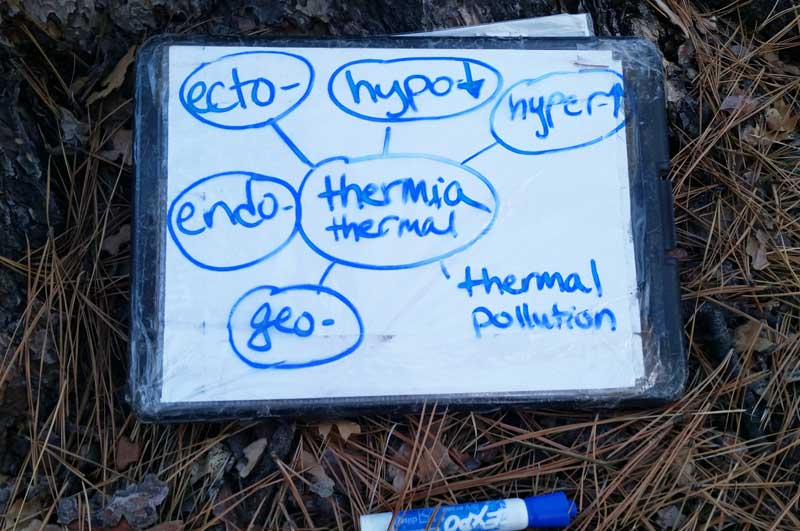 “What does geo mean? It’s the same root as in geology, or geo-locate, or geo-caching.”

Soon they put together that geothermal must mean heat from the earth, and my job is done for me. Thanks, Latin!

In case they were in danger of forgetting after three repetitions of the root -thermal, it returns with a vengeance the next day. In Outdoor Survival Hike, we soon come to the Rule of 3’s. “Surviving without protection leads to your body being very, very cold… does anyone know what that’s called?” 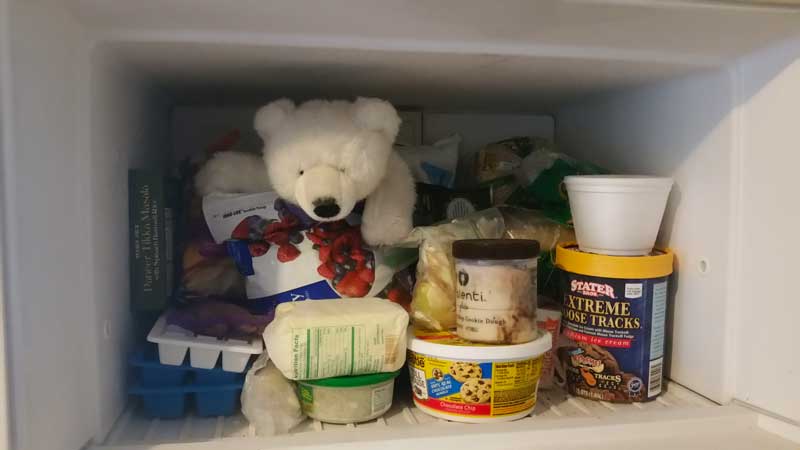 When one student suggests “hypothermia” and I write it on my board and underline thermia, they almost roll their eyes this time at the repetition. But then we’ll move on to hypo, which means low, and I ask them to remember it by noticing that hypo and “low” have the same “oh” vowel sound.

Moving on to Spanish…and French?

Even though learning root words usually means we’re talking about Latin, sometimes Spanish’s close relationship to Latin comes in handy. Spanish-speaking students are not often celebrated in the classroom for their multi-lingualism even though speaking and maintaining multiple languages is not only great for your brain health, it’s also super cool. So, when we discuss how mammals can fall into three different categories of consumers, I ask if anyone in the class speaks Spanish.

“Can you tell us how to say meat in Spanish?”

“Carne?” they say uncertainly, not sure what I want from them.

“Excellent! Does anyone know what we call animals that mostly eat meat?”

Most of them have heard of a carnivore, so even if they wouldn’t come up with that answer without prompting, this is enough for most hands to go up. I explain –vore by saying it comes from the same root as the word voracious, like a voracious appetite, so it has to do with eating. 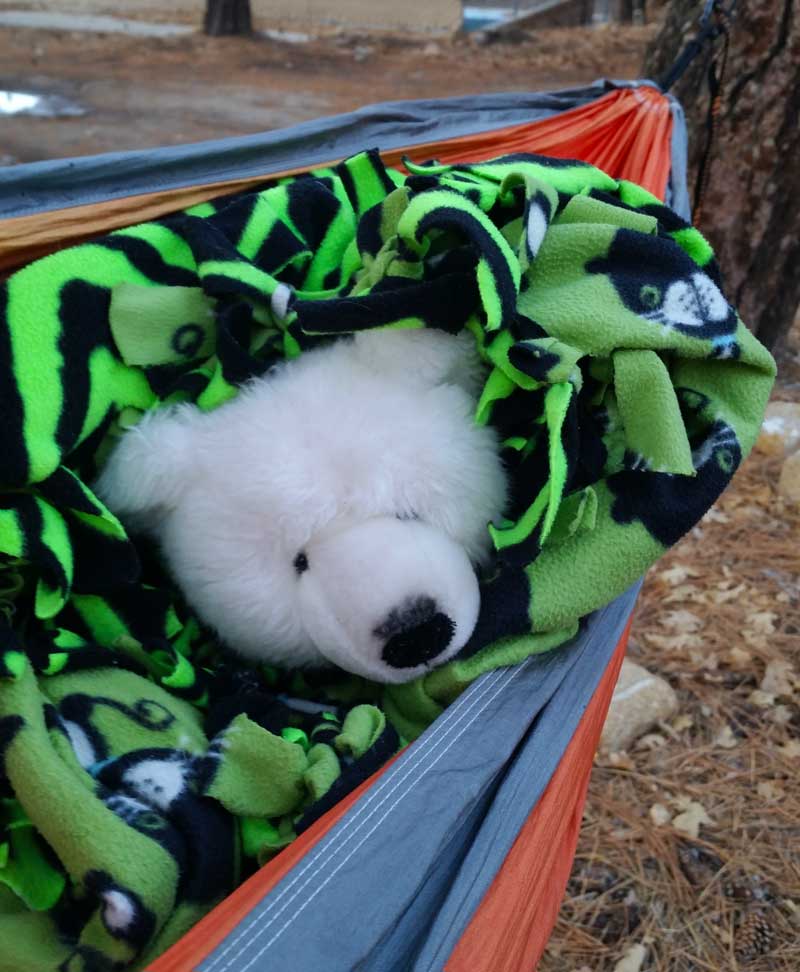 My small Spanish consultants can also be useful later on in the class, talking about more adaptations mammals can have. Most students know what hibernation is, but don’t yet understand the concept of hibernation and estivation both being types of torpor in different seasons. Although invierno is not quite as obvious a connection to hibernation, I ask the class if they hear how the words are related when we say invierno in Spanish, and hiver in French, and then again between hiver and hibernation. With that chain, the relationship becomes obvious, and suddenly they understand that hibernation is for winter only, and estivation is for the summer.

Like everything in teaching, it’s exciting if we teach with excitement. A linguistics nerd at heart, I love to talk about words and their origin, and shake my head at the idea that Latin roots are boring. Instead, I tell my students that I’m giving them a toolbox to figure out fancy science words for the rest of their lives. The cool thing about brains is that they already know these roots implicitly, from having prior knowledge of the English language, and a little underlining on my whiteboard is pulling that knowledge to a more accessible and explicit understanding in their minds. 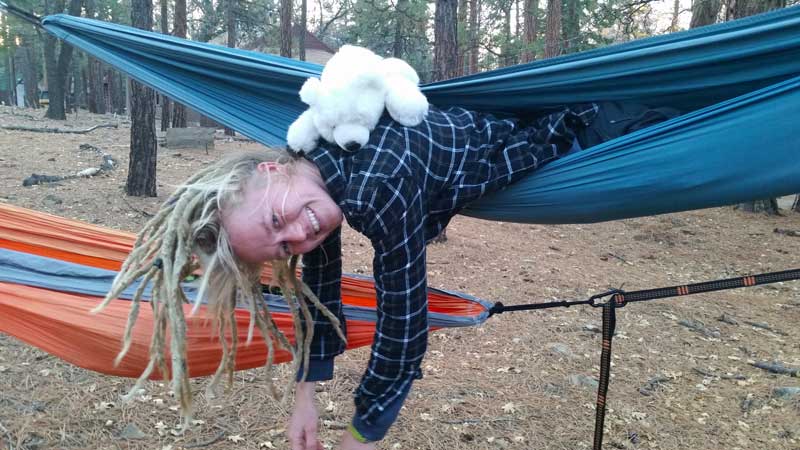